We have been using the services of FilmMyShow for many years now – always helpful professional from start to finish! we have no reason to look elsewhere!

AT School of Dance 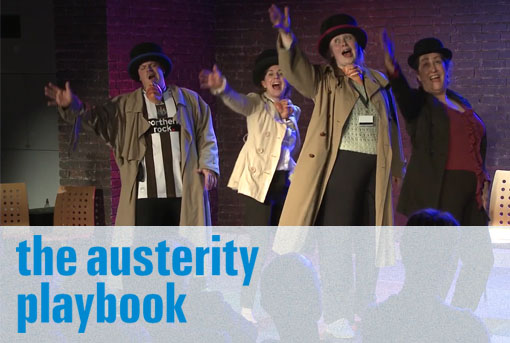 Over the past few years, professors Laurence Ferry and Ileana Steccolini have carried out research on Austerity. The research sought to define exactly what ‘Austerity’ means for those living under it by examining different forms of austerity and the effects on local council authorities and citizens in the North East of England.

To create a bridge between the research and the public, the researchers collaborated with jazz composer Andrea Vicari, writer and professor Mark O’Thomas, and director André Pink, the research was used to pen the musical ‘The Austerity Playbook’.

In order to reach a wider audience and allow the result to be integrated back into the research, the performance would need to be filmed and that’s where we came in!

Leveraging our musical filming experience that we’ve developed for over a decade with our fantastic FilmMyShow customers, we were all excited to be involved in such a unique project.

A work-in-progress performance was held at Newcastle’s Northern Stage in November, and we were tasked with producing a musical filming of the night as well as a short documentary featuring interviews with the researchers, cast, and crew exploring the nature of the research and how it was integrated into the creative process.

The research was bought to life featuring a live 3-piece Jazz band playing original music, five extremely talented performers, and an interesting pair of puppets. The musical takes a uniquely personal approach focusing on how austerity has impacted the characters directly.

There are plans for the musical to be refined and developed further in the future, and we hope we’ll have the opportunity to record a later version allowing a unique insight into how the creative elements evolved in response to how politics and society changes during its development.

While the particulars of this musical filming project are a little beyond the scope of what’s usually offered as part of the Film My Show service, the actual performance was filmed identically to how we handle our multi-camera high-definition recordings using the same cameras, operators, and techniques.

Although FilmMyShow is a package service, we’re always eager to get more creative with musical filming so feel free to let us know when you book what you’re after and we’ll see what we can do.

The musical filming performance in its entirety and the documentary are both available to watch online for free on the Durham University Business School YouTube page:

Please be aware that the performance does contain some strong language!